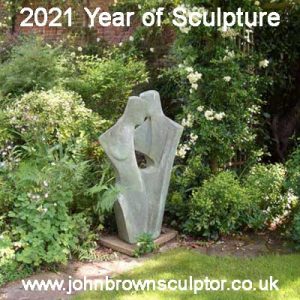 The John Brown  2021 Year of Sculpture

John Brown will be creating a series of sculptures

to celebrate his 90th birthday in July

This began in 1955 at Hornsey School of Art, and continued under Howard Bate R.A. at Hampstead Garden Suburb Institute, where he later became Head of Art.  He relinquished this post in  1992 to concentrate full-time on his sculpture.   By then his unique stone carvings and editioned works could already be seen at major exhibitions, art fairs and galleries throughout the British Isles. The opportunity then arose for him to spend more time in his studio in the former stable of his home in Chipping Barnet, North London.

He and his wife Pauline opened The Bow House Gallery and its garden in 1988 when the cellar of the house was converted to a purpose-built space, where they held seven  exhibitions a year, showing paintings and sculpture of  well-respected artists from all over the country.  This space now serves as a gallery which art-lovers and prospective buyers can view his interior sculptures. Now, despite the current pandemic, he continues to work on commissions and smaller pieces which he sells via his website and galleries where possible.

Early in his career John completed several religious commissions including a six-foot crucifix for St Philip the Apostle, Finchley, North London, ‘Welcoming Christ’ for St Michael’s School, Finchley  and ‘Supplication’ for the United Reform Church in Whetstone, North London.  When his local parish church, St John the Baptist, in High Barnet was renovated,  he created a ‘Mother and Child’ from one of the original stones.

John  has been successful in achieving  many commissions and purchases from  prestigious corporate clients,  including GlaxoSmithKline, Investec and Marathon Oil Company. His work is also in two prestigious art collections – the Ingram Collection of  Modern British Art and the Prudential Insurance Company Collection.

John has been commissioned to produce a number of sculptures for public places.  You can see his work at hospitals, including Weston Park Hospital, Sheffield, The children’s ward at King’s College, London, Barnet Hospital, and Darent Valley Hospital, Kent as well as the Upper Chesapeake Medical Centre, in Maryland, USA.  Four of his smaller pieces are sited in the Jeffrey Kelson Centre at Central Middlesex Hospital.

To celebrate the Millennium

John  created a sculpture  entitled Tête à Tête to be sited on Church Green, Harpenden and also a large sculpture for Priors Court School, Thatcham in Berkshire.  The same year he was asked to make a trophy for the BBC ‘People’s Award with a ceremony at the Royal Albert Hall. The  winners included Sir Magdi Yacoub, Judi Dench, Elton John and David Jason.