So far this year has proved as busy as usual with exhibitions at the Affordable Art Fairs in Battersea and Hampstead with the Linda Blackstone Gallery with sculpture sold at both events. My work is also being shown in a number of galleries including Cricket Fine Art, Sculpt Gallery and Hunter Gallery.   As in previous years, my garden sculpture is being exhibited at Pashley Manor Gardens  in Ticehurst, East Sussex until the end of September.  This autumn the University of Kent is showing two of my dance sculptures ‘Break Dance’ and ‘Argentine Tango’ in their exhibition 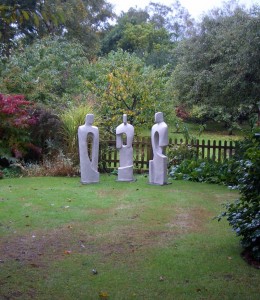 2016 was busy again with various exhibitions  (see Exhibitions Page).  These include a  show in aid of Art for Cure, a charity which raises money for the treatment and cure of breast cancer.  This was held over the Spring Bank Holiday and took place at Glenham Hall, near Aldeburgh in Suffolk.  This was the most astounding success with over 4000 visitors and huge sales of pictures and sculpture including my works ‘Argentine Tango’ and Seated Woman.  Since then I sold work at Pashley Manor Gardens and at Sculpt Gallery.

I have been working on a commission for clients who already possess several of my sculptures – a group of three standing figures based on the Ancaster stone group ‘The Conversation’ which will be installed in October.

In November two of my sculptures have been filmed at the Warner studios as part of the set of  ‘Ready Player One’ Steven Spielberg’s latest film.

There is usually a selection of sculpture to view and purchase at my studio and gallery by appointment.

What was Sculpture News in 2015

2015 proved to be a busy time for exhibiting, details of which can be seen on the Exhibitions Page.  My most recent Ancaster stone sculpture is a group of three entitled ‘The Conversation’  I  also been worked on three new garden sculptures – ‘The Listener‘ in iron resin which was shown at Pashley Manor and ‘Amour V‘  which was ready for the summer.   A commission for a reclining figure in Ancaster stone was completed for a client who already has two of my works. In the autumn I was commissioned to produce a version of my sculpture ‘Vision’ which has been scaled up to 2.5 metres and cast in bronze to be erected in Zhengzhou city early in 2016.  This is my first sculpture to be sited in China.